Burning Down The Goat: A Christmas Challenge - Sweden


For over 40 years the Swedish town of Gavle has erected a 43 foot-high goat made of straw to mark the beginning of the Christmas holiday season.

The goat is a centuries-old Scandinavian yule symbol that preceded Santa Claus as the bringer of gifts to Swedish homes. Many Swedes place a small straw goat underneath their Christmas trees, or hang miniature versions on the branches.

Advent Sunday means it is time for the inauguration of the famous goat (Gävlebocken) in the main square of Gävle, on the east coast of Sweden, where torching it has become a Christmas tradition.

The annual saga of whether or not the goat survives intact until Christmas Day. Half of the people take pride in the giant animal, while the other half take equal pride in attempting to burn it down.

Since 1966, the Straw Goat has survived until Christmas Day only 10 times. Burning the goat is an illegal act and can result in severe fines or even prison time for arson. However, only a few people have been caught or convicted. The burning of the Gävle Goat is not officially welcomed by the citizens of Gävle, but it has made the goat famous and led to increased tourism. The Department of Tourism in Gävle gets bombarded with e-mails from all over the world questioning whether the city supports the burning of the Gävle Goat. Officially the city says that it does not support the burnings. 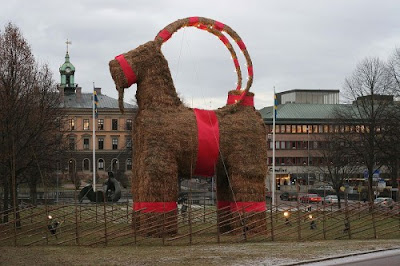