World Most Viewed You Tube Video


The song has taken the world's music charts by storm over the past few months, with its video having been shared and liked by millions, in the process earning PSY a Guinness World Records title for "most viewed video online".

While Justin's loyal Beliebers are watching "Baby" an average of 403,228 times per day, "Gangnam Style" is still seeing over 7 MILLION views per day - 7,060,231, to be precise. PSY is now on track to cross the 1 billion view threshold around December 16th

"We're pleased to present his official certificate to such a global phenomenon," said Guinness World Records Editor-in-Chief Craig Glenday, who presented the certificate at the radio studio. "Gangnam Style is an infectious, joyous song that has brought a smile to the faces of a tenth of the world's population, and the result is that it's the most liked video of any kind in the history of YouTube!"
Receiving the award, Psy says, "I'm honoured. This is the first certificate I've ever had... I didn't get one at school." 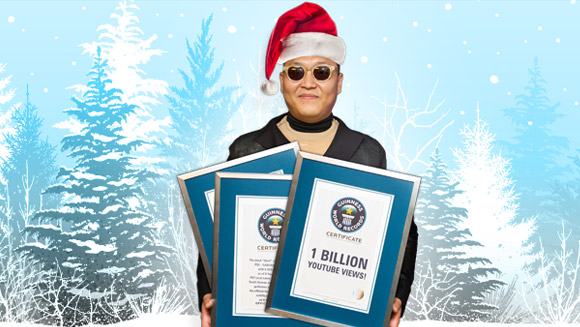